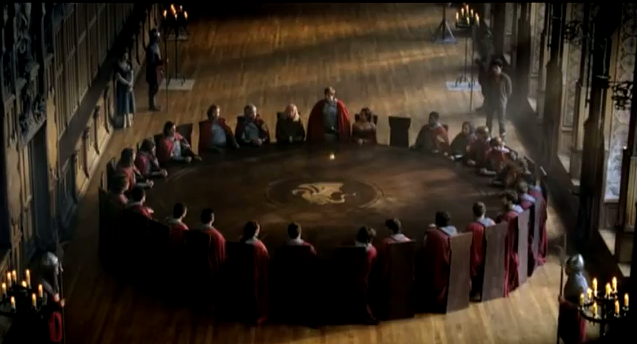 image from Merlin BBC series as posted on wikia.com

Once we were a safe distance from Morgan’s castle, Ferdinand landed so we could reposition ourselves on his back. “That was incredible!” Dindra whooped. “Do you two live like this all the time?”

Ferdinand and I smiled at each other. “To be honest,” I confessed, “it has been awhile since we’ve had any big adventures.”

Dindra looked bewildered. “King Arthur? Camelot? Merlin? Flying on a falcon’s back?” She patted Ferdinand. “How could life ever be boring?”

“Well, it just got interesting again recently,” I answered over my shoulder. Dindra, who had her arms wrapped around my waist, squeezed a little tighter and smiled.

We arrived at Stonehenge just as the sun was rising. “That,” said Dindra breathlessly, “is the most amazing sight I’ve ever seen.”

“No people – and few animals – get a bird’s eye view of this,” Ferdinand replied. Dindra and I laughed.

The stones were as tall as four men standing on each other’s shoulders. An outer circle wrapped around five sets of larger stones. A vast empty field surrounded the massive monument. “How do you think humans moved those huge rocks?” Dindra wondered aloud.

I shook my head in amazement. “I don’t know. Just think, though. The same creatures who made this also invented war.”

“Sometimes it is hard to believe people think they’re smarter than us,” Ferdinand added.

He floated down and landed on one of the larger rocks in the center. I smiled upon seeing the two people who gave me hope for humanity: the sleeping figures of Arthur and Merlin. They had set up camp in the middle of the stone circle. A few glowing embers lingered from a campfire and two sleeping horses were tied to a smaller rock nearby.

As I pondered some clever way to wake Arthur, Merlin sat up and looked straight at us and smiled. He seemed pleased, but unsurprised to see us.

Ferdinand flapped down and Merlin patted him on the head. “Good morning,” the wizard said. “You two must have had quite the adventures.” Then he noticed Dindra. “Make that three.”

“Who are you talking to, Merlin?” Arthur sat up and rubbed his eyes. “Otter!”

I rushed to the king and gave him our traditional thumb-hug greeting. “What happened?” he asked. “What took you so long to get here? Are you okay?” Before I could answer, he raised an eyebrow and said, “I see you’ve got a friend with you.”

I introduced Dindra and told Arthur and Merlin how she saved my life. However, I was focused on the urgency of our situation.

“We have to get back!” I exclaimed. “Lot’s going to attack Dragon’s Head and take over Camelot!”

Merlin smiled, looking unalarmed. “Sometimes when the perceived need is to hurry the best solution is to slow down.”

I was annoyed with Merlin for staying so calm. He’s probably had a vision of what’s going to happen, I thought.

He offered no explanation. Instead he gazed up at the orange hue slowly conquering the grey nighttime sky. “I believe I shall go for a ride. I’d like to enjoy the onset of this glorious day. Arthur, perhaps you can share your new idea with Otter.”

Arthur stirred the coals of the campfire. Dindra and I settled down on a nearby rock.

“Pretty amazing, isn’t it?” Arthur asked as he took a seat and gazed up at the stones surrounding us. “I bet you’re wondering why Stonehenge was built.” Dindra and I shook our heads and Arthur continued. “Merlin told me people think it is a place for healing or studying the stars.” He paused and got a serious look on his face. “Otter, this is where my father is buried.”

”Is that why Merlin brought you here?” I asked.

Arthur nodded. “My father saw Stonehenge as a symbol of power and strength. That’s the kind of ruler he wanted to be. However, here’s my idea.” Arthur pulled his pack toward him. “Dindra, you’ll be interested to know it was Otter who made me think of this.” He pulled a loaf of bread out.

I scratched my head. “Bread? That was my idea? How’s that going to make you a better leader?”

“No,” Arthur laughed. “I thought you two might be hungry.” He tore off two chunks and handed them to us. “This was Otter’s idea,” he said, retrieving a piece of parchment. He laid it down and smoothed it out. It was a sketch of Stonehenge.

“Stonehenge was my idea?”

“Well, Stonehenge looks like a giant table to me. It reminded me of your first visit to Dragon’s Tail. Your uncle called a meeting of all the mouse village residents at a round stage. It’s how I’m going to lead Britain.”

“From a round stage in a mouse village?” I munched on my bread and stared at Arthur.

“No,” he chuckled. He waved his arm at the huge rocks surrounding us. “One person didn’t do this alone. If I want to unite Britain, I can’t do that alone. I’ll invite knights and leaders to Camelot to work together. We’ll sit at a round table. At a rectangular table, someone sits at the head and automatically seems more important. At a round table, everyone is equal.”

Hmm… can’t do it alone. An idea was brewing about how I could get Excalibur back.

Check out details about the first book, Otter and Arthur and the Sword in the Stone at OtterAndArthur.com. You can buy it here:
Posted by Dave Whitaker at 9:48 PM