Walk Two Moons - and the Art of Telling Two Stories 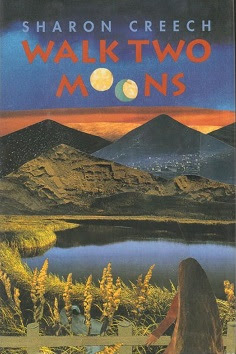 Walk Two Moons (1994), by Sharon Creech, is a Newbery medal recipient which - like seemingly every other Newbery winner - focuses on a girl coping with an absentee parent. I wish I could stop railing on this, but I'd like to see the Newbery committee acknowledge other challenges in the lives of teens and tweens. Anyway, that shouldn't be part of my commentary on Walk Two Moons.

Here's the description of the book at SharonCreech.com:

"Walk Two Moons is the story of thirteen-year-old Salamanca Tree Hiddle from Bybanks, Kentucky, whose only wish is to be reunited with her missing mother. As Sal travels with her Gram and Gramps across the country to Idaho, she tells them the “extensively strange story” of her friend Phoebe Winterbottom, Phoebe’s disappearing mother, and the potential lunatic that comes knocking. Sal also reveals to the reader another story — her own."

As my latest project, Abigail's Atlantis, also strives to tell two stories simultaneously, I was intrigued by the novel's structure of having one story unfold within another. Gram and Gramps are quirky, lively, and heartwarming - and eager to hear their granddaughter's tale as they trek across country to let Sal discover why her mom left. The book does an admirable job jumping back and forth between the stories. Sal's telling of Phoebe's story is really Sal's way of expressing her own fears and doubts and wonders.

My biggest qualm with the book is its need to build the story around characters keeping secrets. Even though Sal's father and grandparents know what happened to Sal's mom, they don't tell her. If they were honest with Sal, the premise of the book largely falls apart. As is usually the case, they do so in the name of protecting her, but I had a hard time not just seeing it as a ploy for writing the book.

As such, I learned some important lessons as a writer. Two stories can be intertwined very successfully together. However, it is important to recognize that techniques like having characters keep secrets can leave a reader thinking, "Why didn't they just tell her?" I want to tell a story that doesn't leave the reader asking, "Well, if this happened, wouldn't that kill the entire story?"

Posted by Dave Whitaker at 11:31 PM No comments:

Posted by Dave Whitaker at 9:26 AM No comments: