It was only a week ago I wrote up my thoughts on rocker Pete Townshend's autobiography, Who I Am (Learning Who I Am from Reading Pete Townshend's Who I Am, 17 February 2013). I dove from that headlong into Neil Young's Waging Heavy Peace. I won't go in to detail rehashing my love of both music and writing, but the skepticism in which I approach biographies or autobiographies of musicians. I'll just get right to the point - what did I get out of this book? More specifically, what did I learn about writing?

Having read this immediately after the Pete Townshend book, comparisons are inevitable. While Townshend's book was very linear, serving up a very straightforward historical account of the events of his life, Young jumps all over the place. The book reads a bit like a collection of stream-of-conscious essays. He will even jump around within a single chapter.

For example, in chapter 57 (one of the longer chapters of the book at a mere 13 pages), Young starts out with a story from his Buffalo Springfield days in the late 1960s. A few pages later, he's talking about David Briggs, who worked with Young on Crazy Horse and produced a number of his albums. After telling a story about scraping up the tour bus on a mountain road, the tale leaps forward into the mid-1990s for no clear reason. Young references rocker Kurt Cobain's suicide note which quoted a famous Neil Young line, "It's better to burn out than fade away." He laments Briggs' passing not long after then rewinds to 1990 to discuss some of the equipment he used when recording Ragged Glory.

Next up is yet another unrelated bit where he recalls recording with Linda Ronstadt and Nicolette Larson in 1977. Before he even finishes that paragraph, however, he has already backtracked four years. It is a bumpy ride.

It is, however, an interesting one. Young relishes telling his stories and sharing his passion for cars and his hope for a new recording format (Pure Tone, later Pono) leaps and bounds ahead of mp3s. This is clearly a man who likes to create. 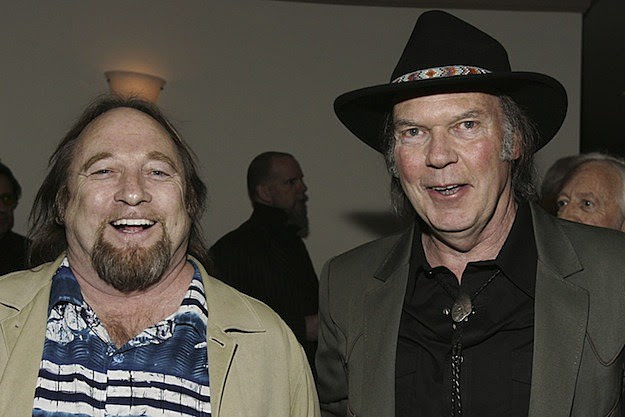 He also fondly recalls the people with whom he has created music over the years. This is not a tell-all where he's dumping on anyone. Despite his own admission that he can be difficult to work with, Young comes across very appreciative of the people who have been in his life. It is uplifting to read someone's life account with such a heavy dose of gratitude and appreciation.

At one point Young talks about Stephen Stills, who he worked with both in Buffalo Springfield and Crosby, Stills, Nash & Young. He relays a conversation they had:

"We talked...about the difficult decisions in life around loyalty, loyalty to friends and loyalty to the muse, how sometimes there was conflict, where serving one meant not serving the other...It has not been an easy part of life for either of us...Stephen and I have this great honesty about our relationship and get joy from telling each other observations from our past. The past is such a big place" (p. 133).

Passages such as this reveal a side of Young which surprised me: he's a pensive, sentimental guy despite a public image of him which is more curmudgeonly. He acknowledges all this in one sentence: "I have traveled a long way along life's pathway and have become somewhat of a hard person to work for" (483). In the next paragraph, he says,

"I am trying to find myself again and reconnect with the values I had in the beginning, find the love in the music with others again, return to the camaraderie that we all enjoyed back in the day, respect others, have empathy for them, be considerate, love myself again, and through that, be more true to myself and others."

The concept of being true to oneself is what resonates with me most as a writer. Would I have preferred Waging Heavy Peace was a more conventional and chronological book? Yes. Would I have liked to see a stronger editor reign in Young's ramblings into more thematically-oriented chapters or at least sections within chapters? Yes. Do I want Young to change who he is to make those things happen? No way.

Posted by Dave Whitaker at 10:09 PM No comments:

Learning Who I Am from Reading Pete Townshend's Who I Am

Posted by Dave Whitaker at 6:00 PM No comments:

Email ThisBlogThis!Share to TwitterShare to FacebookShare to Pinterest
Labels: autobiography, biography, Pete Townshend, Quadrophenia, rock and roll lifestyle, The Who, Tommy, who are you, Who I Am

Various "works in progress" squeeze their way into the piles as well. Right now there's a clipboard with my 7Y0's first illustration for a temporarily on-hold book, Wart and Scraggles. Last night, the rough third chapter of my Otter and Arthur sequel found a brief home on the table as I read it to my sons for feedback. My 10YO plans to bring his story, The Vine Clingers, home from school so we can type it up on the computer. It's bound to end up on the coffee table soon.

It all ultimately means one thing - we have a messy coffee table. I wouldn't have it any other way.

Posted by Dave Whitaker at 5:14 PM No comments: