Posted by Dave Whitaker at 2:14 PM No comments:

Jekyll and Hyde: The Good and Bad of Writing 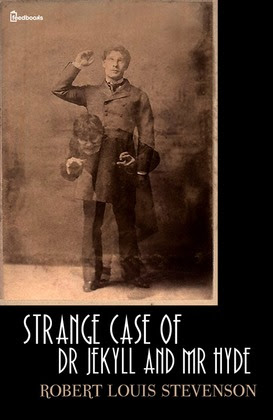 I have just finished reading The Strange Case of Dr. Jeckyll and Mr. Hyde, Robert Louis Stevenson's iconic novella first published in 1886. The story has become quite familiar to most - if not in its original context, in one of its many variations. The story has been adapted to multiple movies, theater productions, and other books.

For those not in the know, the essence of the book is that Dr. Jeckyll is a fine, upstanding citizen in London, England. Unbeknownst to anyone else, he conducts experiments to release his evil side, which takes on the persona of Mr. Hyde. All who encounter the latter are repulsed and when Hyde starts committing violent crime, he becomes a wanted man.

The book has largely become a classic on the strength of the idea of dual personalities existing within the same person. Such a state has psychological basis, which gives the story a certain amount of frightening realism. However, Jekyll's actual physical transformation when he becomes Hyde gives the book a more fantastical element as well. The story is a popular source for both monster and super hero tales because of the concept of two identities existing within one individual.

Conceptually, this is a great idea for a book. From an execution standpoint, however, the story has shortcomings. Any writer today has to tire of hearing one of the cardinal rules of fiction: "Show, don't tell." Rules, of course, are made to be broken and there are always examples of writing which is excellent precisely because the author set the rules on their ear.

In the case of Jekyll and Hyde, Stevenson manages to make a mere 80-page story feel overlong. He devotes nearly the last quarter of the book to Henry Jekyll's written confession. Instead of letting the reader experience Jekyll's descent into madness first hand, we have to endure him telling us about it for 20 pages.

Part of the flaw of the novella is that it begs to be told from a third-person omnipotent narrator's perspective. However, the story is largely told from the perspective of Jekyll's lawyer, Gabriel John Utterson. This gives the book a serious flaw because Utterson does not know Jekyll's secret or even suspect. He is distressed by his client's actions - such as Jekyll giving everything to Hyde in his will, but never guesses what Jekyll is up to. Instead he assumes Hyde must be blackmailing Jekyll.

This means the reader does not get to witness firsthand why Jekyll does what he does - or how. We only get to read about it later. Obviously Stevenson wanted to keep the reader curious, wondering what the relationship was between Jekyll and Hyde. This could make for a shocking reveal when it turned out they were one and the same person.

However, this could have still been done, and more effectively, through a third-person omniscient narrator. It would have been a more captivating story if the storyteller knew what was going on, but only slowly parceled out the details.

Posted by Dave Whitaker at 2:45 AM No comments:

50 Years Ago Today: Sylvia Plath's The Bell Jar was published

Posted by Dave Whitaker at 9:45 PM No comments: