The Midwife's Apprentice: The Role of Mentor and Student in Writing 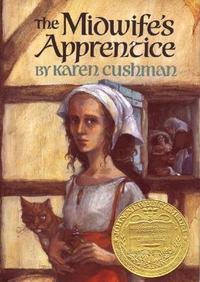 Karen Cushman's The Midwife's Apprentice (Clarion Books, 1995) won the Newbery medal in 1996. For anyone who's followed along on my journey through the Newbery winners, you won't be surprised by my eye roll here. This is yet another orphan story.

The orphan in question is a girl who starts out with the less than hospitable nickname "Brat" but gives herself the name "Alyce" later in the story. Her tale is set in Renaissance-era England, starting with her inauspicious "home" sleeping near the dung heap. She is taken in by the local midwife, Jane. While Alyce learns to become her apprentice, the relationship leaves her feeling more worthless than worthwhile so she eventually sets out on her own.

The mentor-student relationship is almost as common a theme in Newbery books as the orphan concept. It makes sense; a child without parental guidance must seek supervision in some manner. However, I am tiring of the unlikable teachers with which these main characters are so often saddled. It isn't that the mentors must be likable characters, but it is important that the main character transforms as a result of the relationship. Sadly, in a story like this, the character does grow, but would have done so faster and more successfully under someone else's tutelage.

The lesson I take from this book as I work on Abigail's Atlantis is the relationship between 12-year-old Abigail and her grandfather. While I present him as slightly gruff, he is also intended to be likable. The important factor to keep in mind is to make sure that there is some conflict which pushes Abigail and the action forward. That, however, does not have to be a sour relationship with a mentor figure.

Posted by Dave Whitaker at 5:36 PM No comments: