Reading at Boozefish: How to Spot Music Geeks 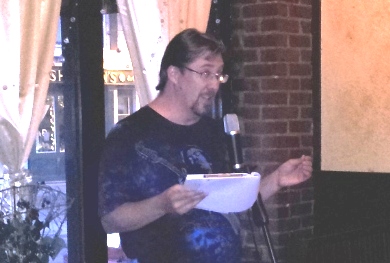 April 19, 2012: Rachel Ellyn (aka The Disfunctional Diva) and I did a reading at Boozefish Wine Bar in the Westport area of Kansas City. My selections were from various pieces I’ve written about music, tied together around the theme “How to Spot Music Geeks.” Earlier in the week, I posted my planned reading, but it underwent some transformation by the time Thursday night rolled around so I thought I’d repost. You can see the original post here.

My name is Dave and I have a problem. I am a music geek. This is a terrible affliction which may render its victims unable to have a conversation without slipping in bits of music trivia. Today I feel it is my responsibility to teach you “How to Spot Music Geeks.” If you know the warning signs, maybe you can help a music geek become a semi-functional human being who is a somewhat productive member of society. Please help – before it’s too late.

1. Seek them out in their natural habitats.
Music geeks can be found at concert venues and bars featuring local bands. They often hang out in basements downloading songs on the computer. Depending on their station in life, it may be in their mother’s house – even if they’re well into their thirties.

Once upon a time, the best place to find music geeks was in a record store. Sadly, the digital age has shuttered many a store, but some do still exist. Even those which have closed, however, still hold fond memories for music geeks. My first reading is taken from my in-the-works music themed novel Music Lessons from The Pit. While The Pit is a fictional store, it is modeled after my own fond memories of shopping at used record stores. Read the excerpt at the Writ by Whit Facebook page or read the full chapter from which the excerpt is taken. This was also fashioned into an article for my PopMatters column, "Aural Fixation".

“My advice is, don’t spend money on therapy. Spend it in a record store.” – German film director Wim Wenders

2. They take their love of music to obsessive levels.
Everyone can relate to having a favorite group or song, but Music geeks don’t just love music; they love it obsessively so. As evidence of the extremes to which music geeks will go, check out the title piece from my collection of essays, No One Needs 21 Versions of “Purple Haze”. Read the excerpt at the Writ by Whit Facebook page or check out the original post on the DMDB blog.

“Music is my religion.” – Jimi Hendrix

For my book The Top 100 Songs of the Rock Era, I actually used a very objective method for determining which songs were featured. I aggregated hundreds of best-of lists along with chart data, sales figures, and awards to determine the top songs of the last half of the 20th century. Read a few snippets on the Writ by Whit Facebook page.

There is hope, however.
Even the staunchest of music geeks is capable of reform. They can learn to recognize that anyone’s musical interests are valid. Read the excerpt on the Writ by Whit Facebook page or read the original post on the DMDB blog. Also available in No One Needs 21 Versions of “Purple Haze”.

“Without music life would be a mistake.” – Friedrich Wilhelm Nietzsche

Resources and Related Links:
Posted by Dave Whitaker at 11:57 PM

Email ThisBlogThis!Share to TwitterShare to FacebookShare to Pinterest
Labels: Aural Fixation, Boozefish, Disfunctional Diva, How to Spot Music Geeks, No One Needs 21 Versions of Purple Haze, PopMatters, Rachel Ellyn, The Styx Defense, The Top 100 Songs of the Rock Era