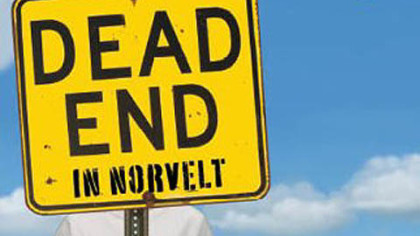 I'm now nine books into my endeavor to read the Newbery-winning books. Jack Gantos' Dead End in Norvelt (2011) follows the fairly traditional pattern of focusing on a pre-teen protagonist coping with family issues in a small town. As usual, there are plenty of quirky characters populating the story.

Among the more notables in this tale are Ms. Volker, the town's obituary writer who has to dip her arthritic hands in hot wax before using them, and Mr. Spizz, who pines for Ms. Volker and rides about town on an adult tricycle. While the town's original founders are dying off around them, these two are determined to be the last Norvelt originals standing - and that includes outlasting each other.

The pre-teen Jack Gantos (yeah, the main character has the same name as the author) is recruited to help Ms. Volker write obituaries. It is his only escape from a summer-long grounding.

This is where the story sets itself up for several seemingly unneeded distractions. Jack is grounded for plowing down his mom's corn field, but he did it under the instruction of his father. The plot device left me angry at the mom for an unfair and over-the-top punishment and I kept wondering how it helped the story that Jack was grounded for an entire summer.

It reminds me of a frequent question writers must ask themselves, "Does it serve the story?" Now, let's be clear. I'm not one who subscribes to the idea that everything that happens in a book must serve the plot. In fact, the colorful details which may not have anything to do with a story's outcome are what keep most people engaged. People don't read just to learn the outcome. They read to see the journey unfold along the way. They read to uncover the delightfully quirky traits of characters.

However, giving a story twists like the main character having the same name as the author and having the poor kid get grounded for an entire summer can create distractions. The lesson is to look for ways to add color, but not in ways that take readers out of the story.

Posted by Dave Whitaker at 1:12 PM No comments: