Musing Over Manifest and Mockingbird 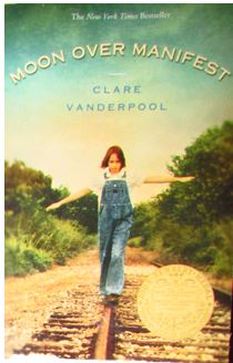 Most of my visits to the library involve my kids. This is a good thing because I end up browsing the children's section. Recently I stumbled across the 2011 Newbery winner, Clare Vanderpool's Moon Over Manifest. As stated on the Association for Library Service for Children website, "the Newbery Medal is awarded annually by the American Library Association for the most distinguished American children's book published the previous year."

Having dipped my toe into the literary waters of middle-grade fiction with Otter and Arthur and the Sword in the Stone, it seemed appropriate to read some of the most celebrated works targeted at that age group. Manifest succeeds largely in that it is written such that it has as much, if not more, appeal for adults as it does kids.

Harper Lee's To Kill a Mockingbird often sprang to mind. Manifest lacks the powerful theme of that classic, but resembles it in how we see the town and its people through the eyes of a young girl trying to better understand her father. The two books also resemble each other in that kids are central figures, but that doesn't make these children's stories. Mockingbird deals with heavy themes and circumstances suggesting readers be at least teenagers. Manifest is so rooted in giving the reader a glimpse of history that it would have limited appeal to pre-teen readers, which makes me question somewhat what criteria Newbery uses to define something as a "children's book."

The lesson for me as a writer is the value of telling a story which appeals to children and adults. Otter and Arthur and the Sword in the Stone and its in-progress sequel, Otter and Arthur and the Round Table, are much less sophisticated stories. I deliberately kept the language and the plot simple to keep younger readers' interest. At the same time, I worked hard to infuse the stories with themes, characters, and scenarios to which adults would relate. Did I succeed? You'll have to stay tuned for the sequel (due in Autumn 2013), but you can check out the first book here:

Posted by Dave Whitaker at 10:07 AM No comments: